The 10th anniversary.  CPIFF screens films from all over the globe with food and drink in venues, including the Everyman Cinema Crystal Palace, West Norwood Picturehouse, Stanley Halls and Anerley Town Hall. With remarkable film quality, each night is a social event to remember and a one time opportunity to catch most of these incredible films. Lots of film makers fly in from around the world for Q&As.

Where: venues all over Crystal Palace and West Norwood

Lambeth Council is consulting on new play equipment for the play area at the top of the hill outside the Health & Leisure Centre. This follows on from a previous consultation. Some funding is now in place and provisional ideas have been drawn up by a play equipment company Playdale Playgrounds. Plans are on display in the Centre.

At Norwood Forum we’re all looking forward very much to the return in April of the free film festival. What recent releases or classics will be chosen this year? Perhaps a chance to see those films subject to a very limited theatrical release – Roma or the Ballad of Buster Scruggs?

In the meantime, there’s a call out to all short film makers:

Some very good news indeed for West Norwood Cemetery and the local community; a £4.6m grant has been securred from the National Lottery for investment in the Cemetery: 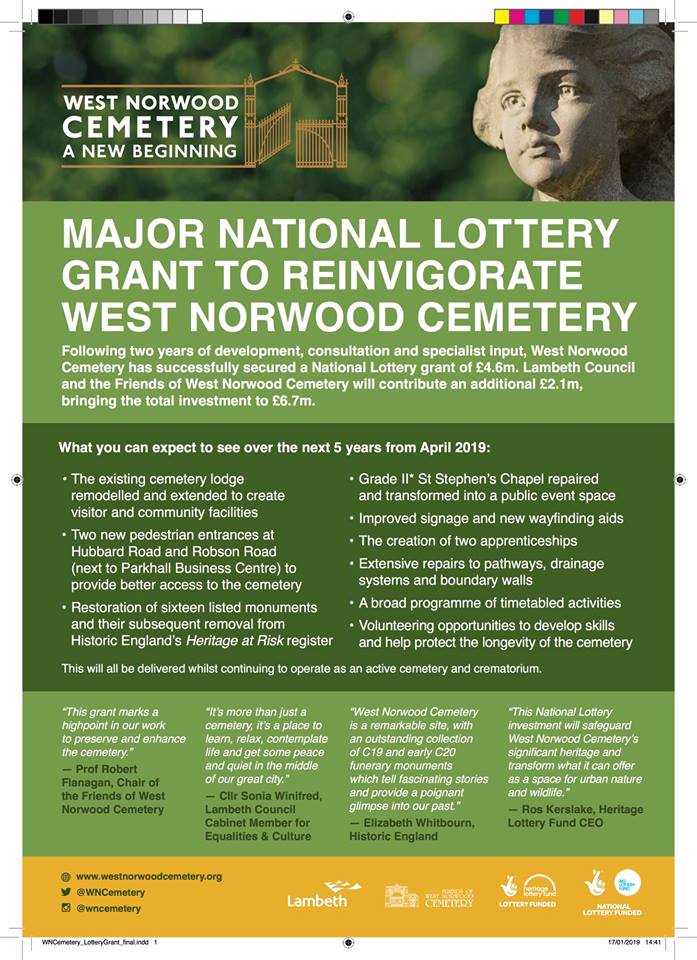 In November 2018 an application was received by Lambeth to demolish the existing funeral directors and beauty salon at 382a – 384 Norwood Road and erect a two to four-storey building with basement to create two commercial units and 12 residential units.

Want to know what’s going on? Want to be involved? To get the latest news, email #NYOC19 here

Transport for London (TfL) are faced with funding difficulties and are not able to commit to the removal of the Tulse Hill gyratory system.  They are happy to continue with the design and modelling stages over the next 3 - 6 months and prepare the business case but the project will then be put on hold.  TfL say they may reprioritise the Tulse Hill project if circumstances change but this is of course unpredictable.

Thames Water are planning to replace mains in West Norwood which could involve digging a trench down Norwood Road, from Palace Road to Robson Road, creating traffic havoc for many months.

The work is scheduled to begin in March 2019 however it is unlikely that all the necessary approvals and checks will have been made in time and May+ is more realistic.  The work could take 3 – 6 months and possibly longer.  In a worst case scenario buses will be diverted, two-way traffic staggered and pedestrians inconvenienced. There will also be a serious impact on local businesses.

Over the past nine months or so, Norwood Forum has been raising the poor cleanliness of the West Norwood town centre with Veolia (the Council’s contractor), Council officers, Councillors, and Station to Station.  The stretch of pavement opposite West Norwood station had become a 24/7 dumping ground for local commercial and domestic waste, and this in turn attracted regular domestic and builder’s waste from elsewhere. Waste was apparently put out on the pavement in unsuitable containers and next to litter bins on Norwood Road, and this resulted in staining of the new pavements.