Our first Know Your Norwood for 2021:

In the General Election of 1857 William Roupell was elected as Liberal MP for Lambeth at the age of 26. He stood as a reformer for the working man and promoted the extension of the franchise. There were accusations at the time that he had bought his seat by bribing voters which he strongly denied. The case was dropped but in truth Roupell was a liar and a fraudster.

As a trainee lawyer William Roupell had started forging property deeds into his name and mortgaging and collecting rents on them to fund his dandy bachelor lifestyle. The properties were owned by his wealthy father who was unaware that they were being stolen from under his nose. When his father died in 1856 to avoid discovery Roupell destroyed his father’s will which left everything to a younger son and substituted it with a forged version that left the estate to his mother who he was able to manipulate. By defrauding his father’s estate William Roupell was able to launch his political career.

Perhaps Roupell thought he could now move on with his life but his younger brother discovered the forged deeds and started legal proceedings to reclaim the properties that had been sold on. The new owners fought back concerned they might have to return their properties and, though William Roupell had fled to Spain and resigned his seat in Parliament, he returned to support his brother’s legal cases.  His return left him open to prosecution and on 24 September 1862 Roupell appeared at the Old Bailey and pleaded guilty to forgery. William Roupell was sentenced to penal servitude for life. He was spared the colonies and instead spent much of his time doing hard labour at Chatham Dockyard.

After 14 years Roupell was released on parole, and he set to make amends for his poor life choices – now involving himself in the church and charitable causes. A keen gardener and especially interested in growing fruit he became a founder and president of the Streatham and Brixton Horticultural Society.  He died in March 1909 at the age of 77 a poor but honest man and highly thought of in the community. He was buried in the family vault at West Norwood Cemetery with two hundred people in attendance. 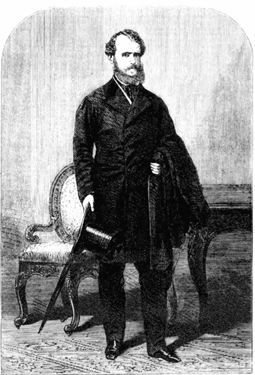