The Palace Cinema Campaign announced last week that Everyman plan to “restore a four-screen cinema to Crystal Palace, bringing films to audiences on the big screen on a regular basis for the first time in fifty years.”

The Campaign will provide a further update once more is known. The original catalyst for the campaign back in June 2009 was the sale of the Gala Bingo Hall, 25 Church Road (the former 1920's art deco Rialto cinema), to Kingsway International Christian Centre (KICC).

The campaign team would like to extend its wholehearted thanks to everyone who has supported and been involved in the campaign over the past eight years. Norwood Forum will let you have more news when this is announced, but like the Campaign’s Facebook page to get involved and received more news as it happens. 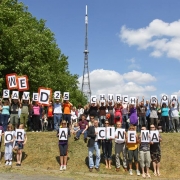