Thursday 3 May 2018: don’t forget to vote! Polling stations are open from 7am right through until 10pm, but don’t leave it late - there’s often queuing in the evenings.

Local elections are being held across the borough to elect all 63 councillors to serve on Lambeth Council. Locally, there are elections for the Gipsy Hill, Knights Hill and Thurlow Park wards.

How do I know where to vote?

There’s the address and a map showing the location of your polling station on your polling card. You can also check this here.

Do I need my polling card to vote?

No, but take it along if you can as it helps the process at the Polling Station run smoothly.

How do I know who to vote for?

You need to read the local party manifestos and local and national press. We have found the following manifestos and campaigning information for the political parties standing across all three local wards:

The official notices of poll can be checked here. You need to know which ward you live in; this information is on your poll card, and can be checked here. There will also be various posters outside and inside the polling station, and one of these is the Notice of Poll which includes the name, address, and party for each candidate.

What happens at the Polling Station?

There may be some political party tellers outside the entrance door. If so, they will ask you for your electoral number (as printed on your poll card). It helps all the political parties to know who has voted and who has not, but its up to you whether or not you give them your number.

Inside the polling station, you will see a desk with the election staff seated behind it. If you have your poll card, the first clerk will ask to see this. They will then ask you for your address, and once they have found this on a printed list (the Electoral Register) they will ask you to confirm your name and then they will make a mark on the register. The second clerk will record some details and pass you your ballot paper (the paper slip you will use to mark your votes). They will also explain where the ballot box is located – this is where you will put your completed ballot paper.

When will I know who’s won?

In Lambeth the counting of votes is being held the next day – Friday 4 May at the Kia Kennington Oval. Results will be known from early afternoon, and as they are declared these will be published here.

The total number of seats won by each party will determine the political split of the Council and who's in charge for the next four years. 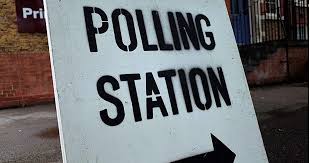