Skip to main content
Station to Station is the Business Improvement District (“BID”) for West Norwood and Tulse Hill.  Formed in July 2016 the BID has the aim of improving the local area and is funded and run by local businesses, with a small part time team managing its projects. They have a number of projects on the go and below is a quick update on a few of them.
KIBA Branding – Station to Station are helping to create the brief for a ‘branding exercise’ for West Norwood's industrial area – in partnership with Lambeth Council. Part of the project will be workshops with locals and businesses to inform a series of 'physical' improvements and treatments to the area (e.g. murals, signage, planting).  The project is a first step which they hope will feed into the longer term aspiration to revive the industrial area, encouraging development of workspace for local employment, in turn bringing more life to our daytime and early evening economy.
Tulse Hill planters - Station to Station will be installing two new planters at Tulse Hill Station Rise this Autumn in partnership with Lambeth Council. Look out for the upcoming opportunity to volunteer at the planting workshops.
Fest Norwood - Station to Station were delighted to be involved with Fest Norwood, the ten-day arts’ festival (see above). A High Street Treasure Hunt – a photograph competition encouraging locals to spell out FEST NORWOOD with letters from shop fronts had a good turnout of participants. 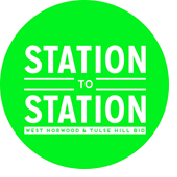