Over the last year there has been a lot of activity regarding the Knollys Goods Yard, the triangular shaped land surrounded by railway tracks that is off Knollys Road and owned by Network Rail.

Developers have been eyeing the site with a view to creating a new neighbourhood which some grandly call a village! Their proposal is for 500 homes, work spaces and a new footbridge to Leigham Vale. As part of this we saw a planning application put forward last year to turn the narrow one-way entrance from Cameron Road into two lanes with a raised pavement for pedestrians (see picture above) and this has been delayed until a final decision on planning for the whole Goods Yard is made.

Lambeth Council would prefer to designate the area for industrial use which is its current usage but this does not sit well with some developers. In recent weeks there have been leaflets distributed suggesting that the Goods Yard “could” be turned into a waste and recycling site, industrial estate and/or haulage and distribution centre but none of these is being planned. The flier goes on to ask local residents to complain to their Knights Hill Councillors about this fictitious made up proposal and provides the mailing address of the developers’ PR firm!

There’s also another possibly completely spurious proposal from a group “Knickers of Knolly’s” for a so called “new late night community venture” - which translates to a lap dancing club. This has been given short shrift by local councillors and would be unlikely to succeed, should this ever become a serious application.

It seems that the Knollys Goods Yard is going to be hotly fought over. Developers see the merits of building in West Norwood and it is up to Norwood Forum and other local groups to monitor and campaign for a fair outcome that ensures the community is considered. 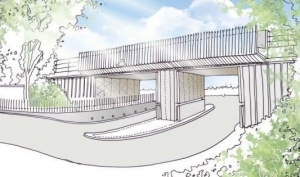