Lambeth Council is now seeking the views of residents on the locations for polling stations in the borough as well as on on the boundaries of polling districts. This review is as a result of the changes made to ward boundaries by the Local Government Boundary Commission; Lambeth’s electoral wards increased from 21 to 25. Locally, there are now four wards instead of three. The formal consultation went live on 29 October and closes for comments on 30 November 2021.

This statutory consultation follows on from the earlier request to submit comments to inform the now produced draft statutory report; see our 29 September story here. We submitted comments on 15 October, including:

We also provided a list of 16 premises to be considered as polling stations (but the Council had not published its requirements), and suggested six other schools premises that might be considered if schools were to be used. As we did not receive a reply we will assess the statutory draft report to try to establish the extent to which (if at all) our views have been considered, and respond to the statutory review.

Have your say on the Council's statutory proposals. 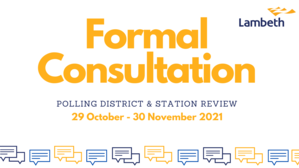